When I (Mike) first arrived at Takine Junior High School (my primary school), I have to admit that I had a hard time fitting in. In fact, for the first couple of months, I didn’t really feel like I connected with anyone (teachers or students), and when I would talk to my fellow team members who have been here longer and have all kinds of good relationships with people, I would find myself wondering what I was doing wrong. Well, thankfully, things have gotten better at T.J.H.S. recently –a lot better. In fact, in this past month alone I’ve gone from feeling marginalized and unpopular to being well-liked and popular. Part of it has been the fact that the kids probably feel more comfortable around me because they’ve had time to get used to me. But the real key to my cool factor is that I finally learned that the way to a middle-schooler’s heart is random goodies from the dollar store.

Yup, about three weeks ago we got a care package from my Mom that had some serious stuff as well as some dollar store treasures. In a moment of inspiration, I decided to take some of it to school with me. I took 4 plastic frogs, a slinkie, a plastic game of jacks with (two super balls), bubble-blowers, and a few other things. Sure enough, the kids developed an instant fascination in all this random stuff that was suddenly on my desk– “What this? What this?” Around the same time, the second in command of the school asked me to go upstairs during break time and “speak English” to the kids who have been horsing around in the school’s mostly unused “International Relations” classroom. So when I went up there with my toys, all of a sudden kids wanted to talk to me. And all of a sudden I didn’t speak Japanese, and pretended to not understand anything they said unless it was English. To my absolute shock, they kept coming, day after day, and now it’s grown into quite a crowd. And ironically, it’s mostly the “bad” boys–the ones whom I least expected to be willing to use their brains outside of class.

It all reached fever pitch when I gave one of the kids one of my frogs. He came back the next day, and I gave him a yo-yo. Soon lots more kids were asking me to give them stuff. So one day I came up with a “point system” –completely unannounced and unexplained. Sure enough, the randomness factor instantly catapulted the point system into the Junior High ultra-coolness realm. Now, if they want me to give them something, they have to use points (little green paper stars that I cut out by hand and signed) to “buy” it from me. And they can get points by–you guessed it–speaking English! So now not only are they talking to me more, but they’re actually speaking English of their own volition! This truly is an a amazing miracle–and I owe it all to random stuff from the dollar store. Welcome to teaching in a junior high school! 🙂

Here are a few pics to show you what I mean: 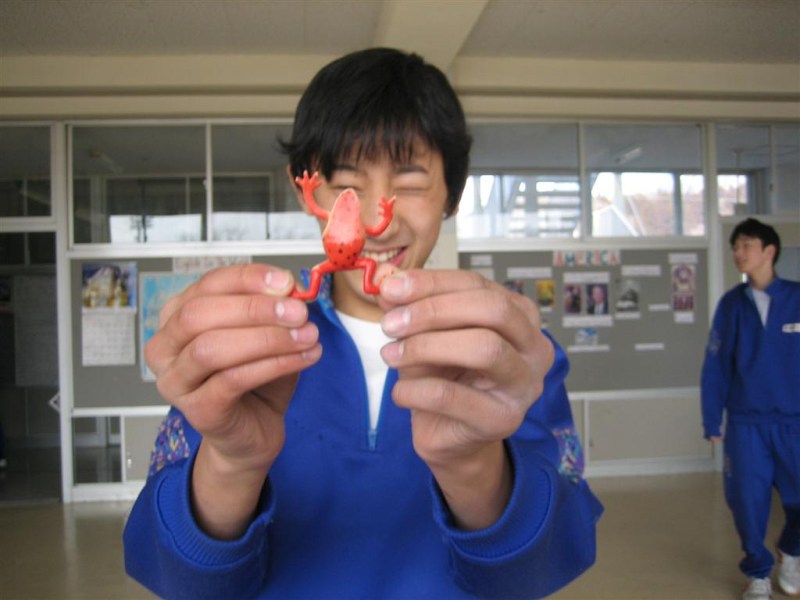 This particular kid (whose name I should know by now)  worked hard for his frog , and so he was pleased as punch when he could finally call that little lump of plastic his own. I didn’t even have to tell him to smile! That’s a miracle, too–Jr. high boys pretty much never smile for cameras when you want them too! Amazing power in those frogs… 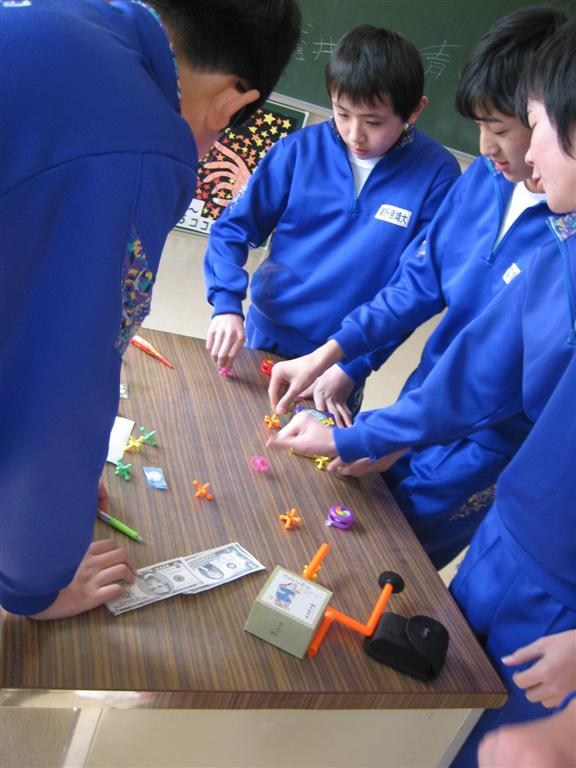 This is what it’s like nowadays– a whole bunch of kids crowding around the empty desk that I use as a toy station. Note that they’re using the jacks as tops–one popular game is to see who can spin their top for the longest; another is to play “top wars”. And don’t worry about the money there on the desk–those are just counterfeit bills that I printed off here at home to give the kids exposure to American money. And note how the orange field goal has a suction cup at the top. That’s so you can put it upside down on the floor like a little soccer goal and play “super-ball bowling”. Seriously, it’s a big hit here. Note also the Slinky (TM) and the little plastic robot arm–both perennial favorites. And there’s also a wooden snake-pen that a friend sent to us from India–also a very popular item. 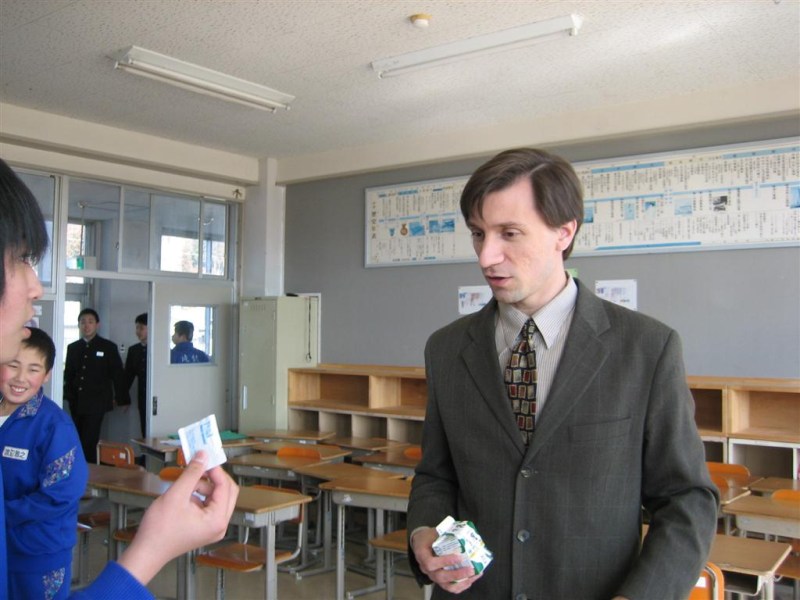 Here’s me talking with my best customer, Yuuma . Yuuma is sort of the school clown, and is always getting himself into trouble, but he seems to like interacting with me, probably in part because I’m just as goofy as he is and I’ll actually humor his crazy jokes. Here I believe we are disputing the possession of a carton of milk–“It’s mine! It’s mine!”  🙂

Now for something related and yet completely different…

On Tuesday I received a hand-made  invitation (along with all the other teachers) to a “Thank You Gathering” that the graduating 3rd-year kids were having. It was actually really special, because you can tell that the kids who made the card really put some thought into it, and loaded it up with in-jokes. (The stars on the front hearken back to my point-system, and the word “eighteen!” is an in-joke as well.) The outside (which says, To Mr. Costanzo) looked like this: 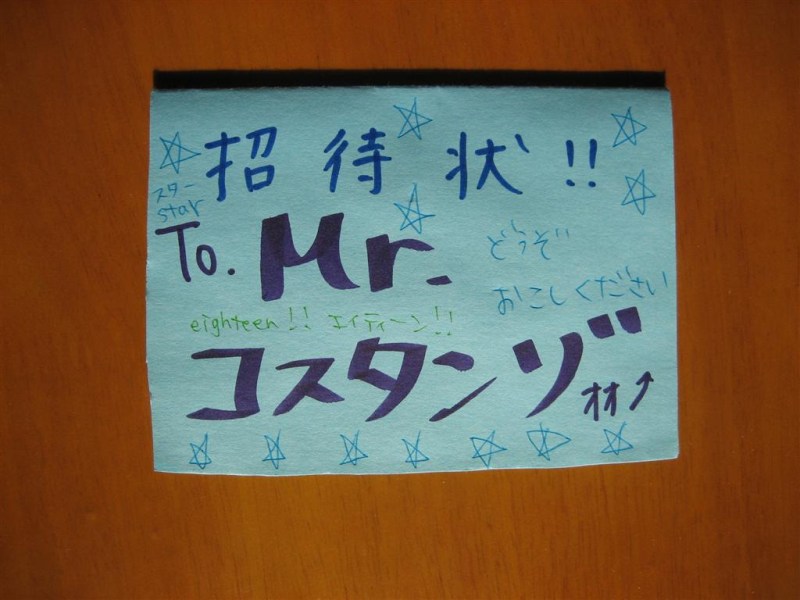 And the inside was even better! They randomly took my picture one day, and pasted it in along with lots of other funny things (like a little balloon that says, “Hey there! I’m Mr. Costanzo!”, and another that says, “I’m cool!”. Now I don’t know everything about junior high kids, but I’m pretty sure that they don’t call people “cool” against their volition–you have to be a special kind of nerdy-cool weirdo or something. Apparently, I fit the bill. 🙂 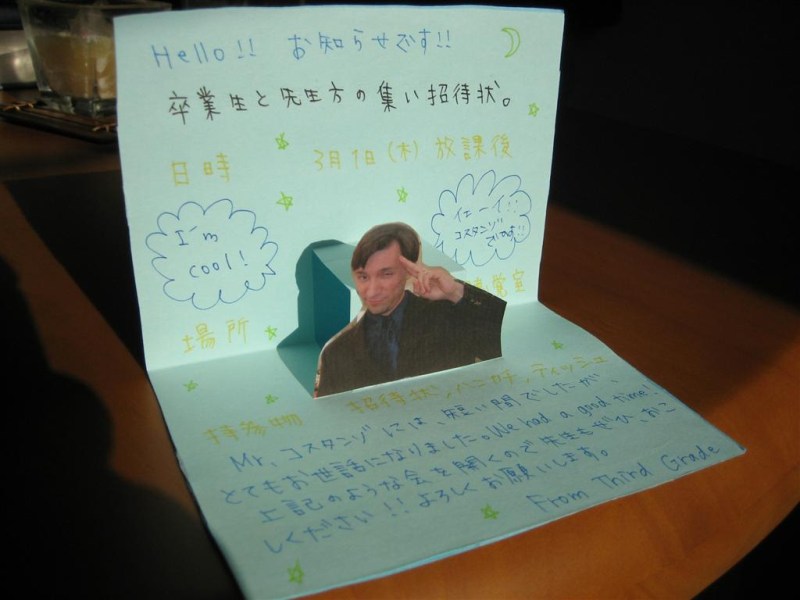 Then, at the actual gathering, I recieved this. It’s a sort of stationary board that all the 3rd-year kids in class number 3 signed (hence the 3-3). Again, it’s full of in-jokes, like “18” and “enough” (trust me, you had to be there). And some of the kids even wrote in English–without a single mistake! Wow. This is a really special and sentimental present that I will cherish for years to come. 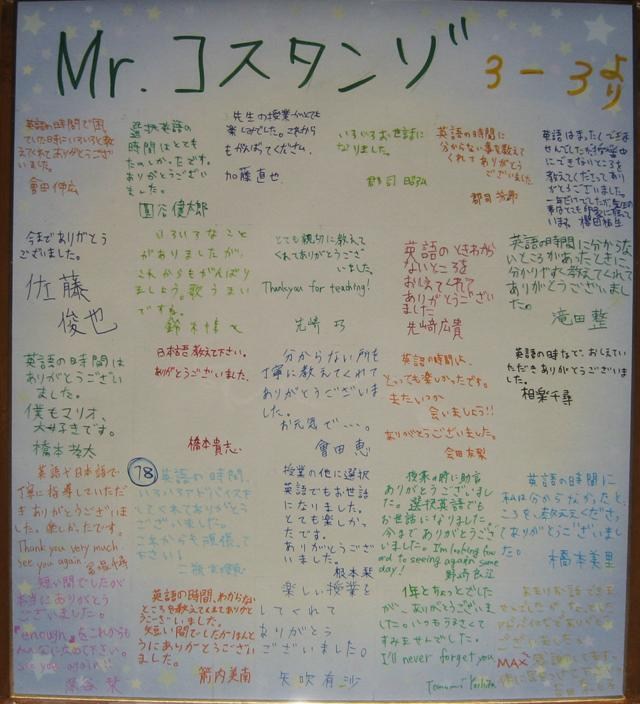 So at last I feel like I have a place in Takine other than desk-potato or human tape-recorder. I feel like I’m finally starting to get the hang of junior high kids–where they are, what they like, etc. And I feel like I’m finally perceived as approachable enough for kids to initiate conversation with me, both in and out of class. If I can keep this inertia building, then by the time I leave in 2008 I will have connected really well with a lot of people. May it be so, Lord!

Thanks be to God for this amazing chapter in our lives!