Ok, so some of you must be wondering by now, “More digital artwork? Does Mike even study at all these days?” Thankfully, the answer to both of those questions is yes; I am indeed studying, but I’ve also had some wonderful opportunities to do a little bit (ok, a lot ) of digital work on the side. No longer merely a Photoshop user, with Jen’s help and support (and lots of online tutorials), yours truly is now an amatuer Illustrator and In Design user as well. (These are some other major Adobe graphics programs in case you’re wondering what I’m talking about.) Anyway, things at school are about to get busy again, so I figured now was the time to post the most recent batch of artwork so that you can all scratch your heads and wonder, “What happened to Mike? He used to be, well not normal, but at least MORE normal…” 🙂

Ok, here we go! Welcome back…to the world of Mike… 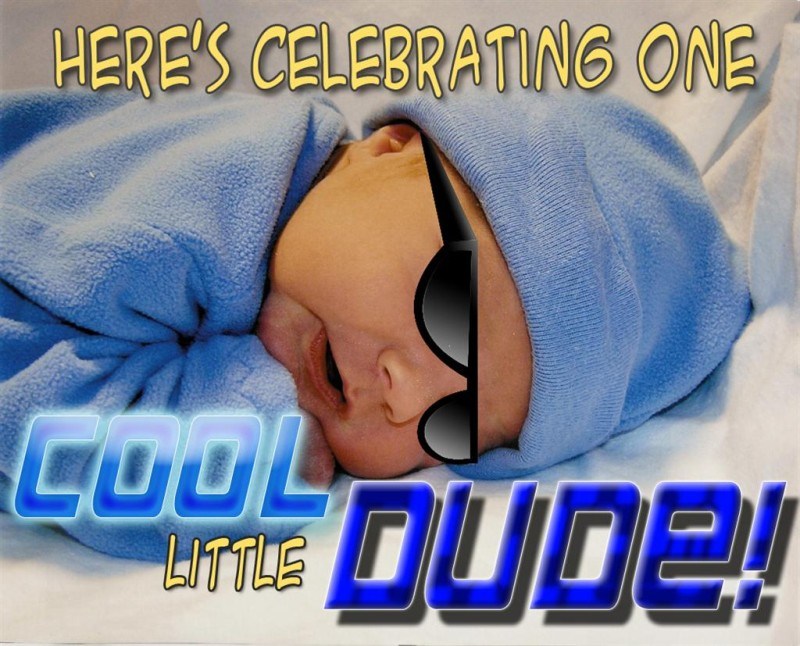 We have been abundantly blessed this month by the recent arrival of 2 new babies among the RTS counseling students and their families. This has been a joyful and exciting time for everyone, especially since the delivery dates were so close together (within a week of one another, I think). It was so close, in fact, that there was a ‘race’ to see who was born first, and in the end it was Henry Thompson that was the winner. Actually, they were both winners–both have been born to wonderful, God-fearing parents who love them and will take good care of them. We are all so happy and proud for them, and we look forward to seeing them grow in stature and grace. About a week before the two births, we had a cojoint baby shower, and I designed two cards, one for each family. The one above was for Henry, and while the image itself wasn’t mine, the sunglasses were hand-drawn by yours truly. (My favorite part of it, though, was the message on the inside of the card: ” This is one cradle that’ll never stop ROCKIN!!! ” Hehehe…) 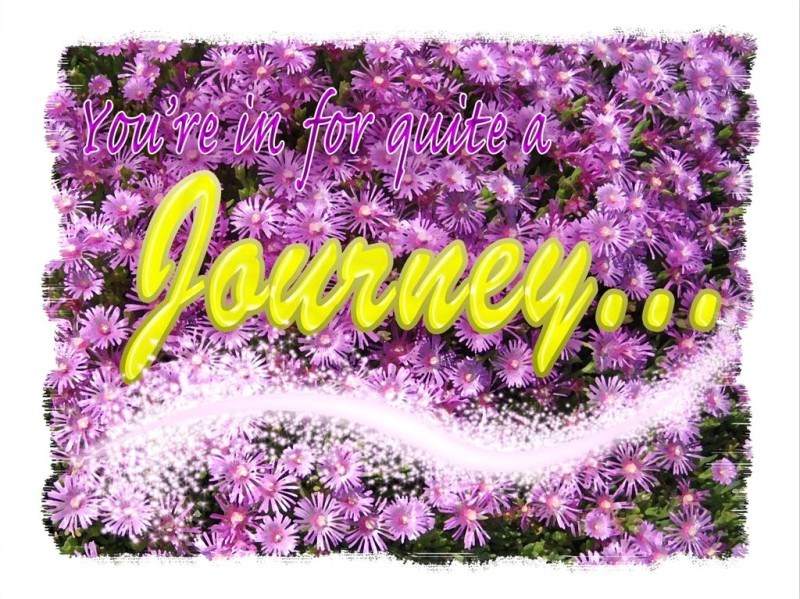 This is the other baby shower card I designed, this time for little Journey Summerville. Isn’t that a great name? I just couldn’t resist making the name the focus of the card, and since she’s a girl I just had to add flowers and pink sparklies and all of that pretty stuff. 🙂 I don’t know if you can tell, but I used a special filter in Photoshop to make the flowers look like they’ve been painted rather than photographed, and even the border has a ‘brush-stroke’ effect applied to it. Fun fun fun, eh? 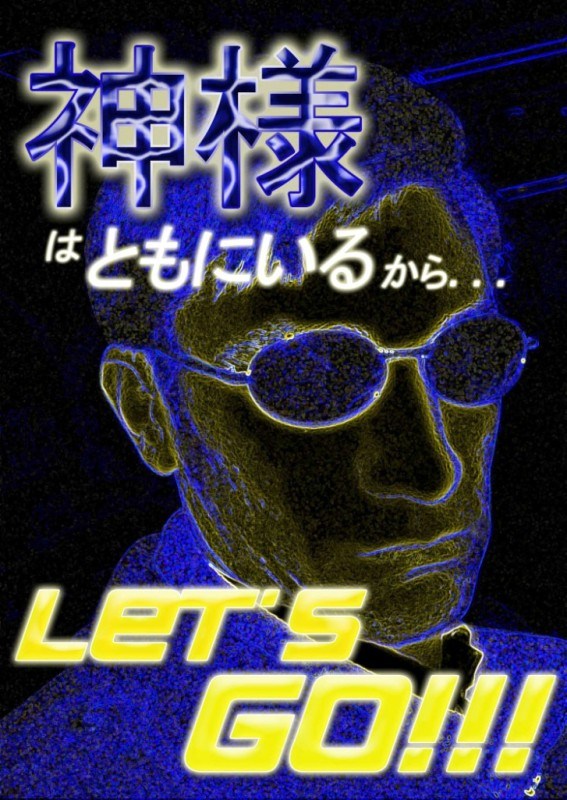 Ok, there’s a story behind this one that you need to know before I tell you what this says. It all started in Japanese Bible study. We were studying the Old Testament story about the 12 Hebrew spies that go over into the promised land. As you probably know, 10 of them come back doubtful that they’ll be able to enter the land because the people there are too powerful, but two of them (Joshua and Caleb) said, ” Let us go up at once and occupy it, for we are well able to overcome it ” (Numbers 13:30). So Noriko (the Bible study leader), in an effort to help us see how cool and courageous Joshua and Caleb were, imatated them by putting her fist in the air, looking intense, and saying (in Japanese and English), “God is with us, so LET’S GO!!!” Well, I thought that was the coolest catchphrase ever, so in an effort to make it so, I created this image. I love how the big chinese characters at the top (which say “God”, by the way) glow as if there was lightning rippling around inside of them. And that guy in the image, well… Just pretend he’s Caleb or Joshua or somebody who has that kind of faith. 🙂 So remember: Kami-sama wa tomo ni iru kara, LET’S GO!!! 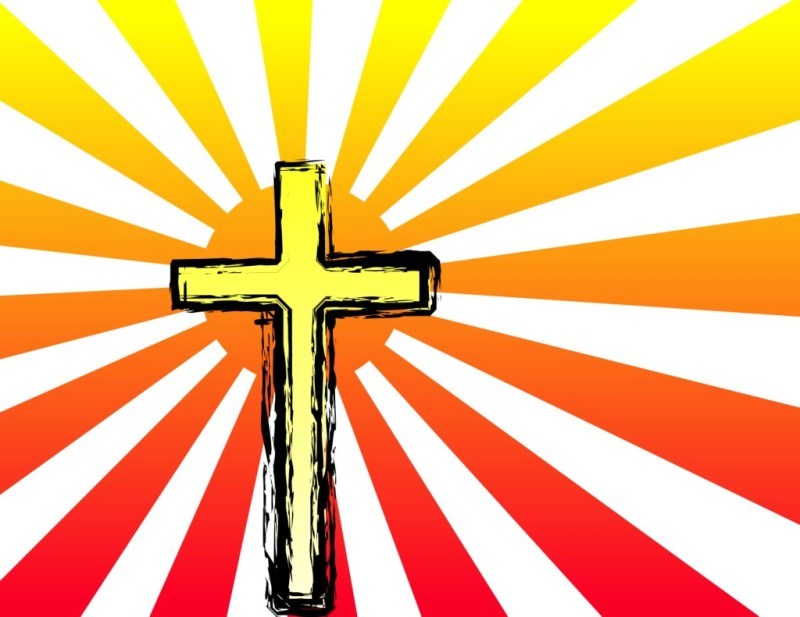 This next one is really simple, yet multi-faceted and full of meaning. Obviously, you recognize the cross, and at first glance the beams of light look like they’re emanating from the cross (which of course they are). But if you look more closely, you’ll recognize that the beams and the circle in the background are the Japanese-style rising sun motif! You got it–this is meant to symbolize the supremacy of Christ over every aspect of Japan and its culture. But notice how the rising sun motif, although colored differently, is still essentially the same–Japanese culture is not destroyed, but transformed. In fact, Japanese culture  brings a unique glory to the cross when it is in its proper place of submission to the cross. Neat, huh? Maybe you think I’m reading too much into it, but I’m convinced that even simple visuals like this one can communicate meaning in a uniquely memorable way. And I know that for me, next time I see that rising sun, I’ll be imagining a cross over top of it.

This last one, though, is just for laughs–certainly no deep meaning here! The idea for a ‘Locusts and Wild Honey’ cereal came, oddly enough, while sitting around drinking coffee after church one Sunday. I don’t know how the subject of John the Baptist came up, and I certainly don’t know how we got the idea for a cereal box. But the idea grew on me, and I just couldn’t help thinking that not only have I actually eaten locusts in Japan, I still have the pictures on my computer. So I had no excuse–I HAD to create this image. I had a lot of fun adding all the little details, from the net weight (given in se’ahs and ephahs) to the “Free Camel’s Hair Garment’ offer (only 100 boxes! What a steal!) So anyway, in case you needed more proof that ol’ Mike is cracked, here it is. Actually, I’ll bet this cereal would be better for you than most of the super-sugary American kids’ cereals on the market today! You know, the ones that give you an insulin headache and make your milk thick and syrupy and gross–Yuk!!! Now that ‘s disgusting!

Ok, I guess it’s time to wrap it up and get going. Thanks for reading and viewing! Until next time, stay crispy, stay crunchy, and don’t forget to save those box tops–only 99 more to go!