Long time no blog, eh? This week is Reading Week at RTS –which means I have no classes this week!!! Yup, I get to stay at home and read, read read–whoohooo!!! Acually, I desperately needed this week, both for school stuff–I’ve got about 3 weeks of catch-up reading to do–as well as to catch my breath and have some fun. Jen and I are hoping to go to the beach next week, and in the meantime, I’ve been busy working the sound board for a wedding at RTS and dabbling in various graphic art projects. In fact, just yesterday I finished up 2 old graphic projects and completed a brand-new one from scratch! I’m really excited about how my computer-hacking skillz are coming along–I’m starting to make some really cool stuff! Wanna see??? Huh? Huh?

You’re still reading so I assume your answer is an emphatic “Yes!” Ok–here goes! Welcome to the World of Mike’s Art…

This first one is kind of an inside joke. During Research and Program Evaluation this summer, we watched a candid-camera style video where participants were asked ‘leading’ questions by a female interviewer to see if she could make them say what she wanted them to say–in this case, to get them to admit (falsely) that they had seen a show called Space Doctor . As expected, all of her participants admitted that had not only seen the show, but that they liked it a lot and watched it all the time. But after watching the video, I did some research and suggested to the class that there really was no such show, even back then. One of my fellow students, however, was appalled by the indecency of the idea, and said, “No, there MUST be a show called Space Doctor! There has to be!” So just to get her goat, I went home and made this image, thinking she would see through it and laugh at me and say, “Nice try.” But instead, when I showed it to her, she rejoiced–“Hooray! I KNEW there was such a show! I just KNEW it!” However, the teacher, who was more skeptical, came over and asked, “Um, did you make this on your computer?” When I said ‘maybe’, my classmate’s fell into utter shock–“Nooooooo!!!!” Ever since then, the term “Space Doctor” has been thrown around at random intervals just to get her goat. Hehehe…. 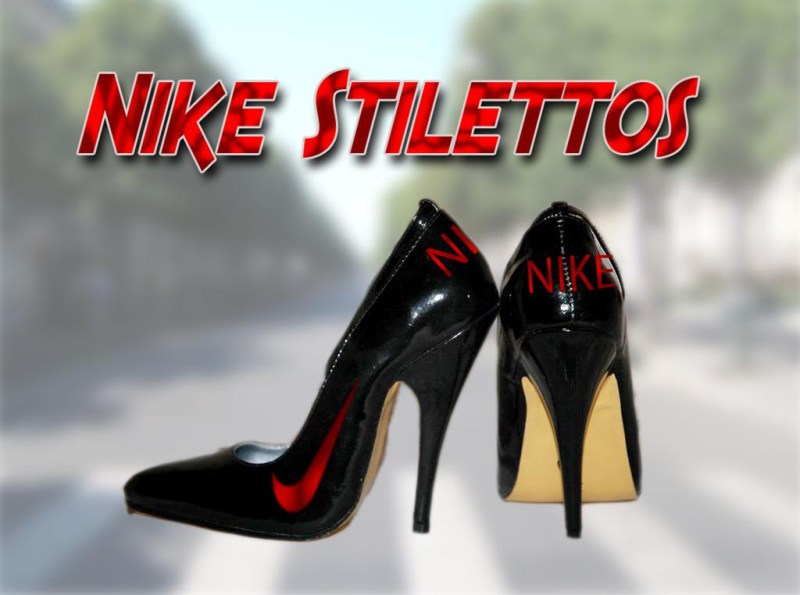 This next one wasn’t my original idea–that came from a classmate–but the graphic realization of that image was too good to pass up! Yes, ladies, now you can have the Nike Stiletto shoes you’ve always wanted! Just $119.95 before tax. I accept cash, checks, money orders, chunks of gold, jewels, platinum, and Best Buy gift certificates. Order now, supplies are limited (very limited…) 🙂 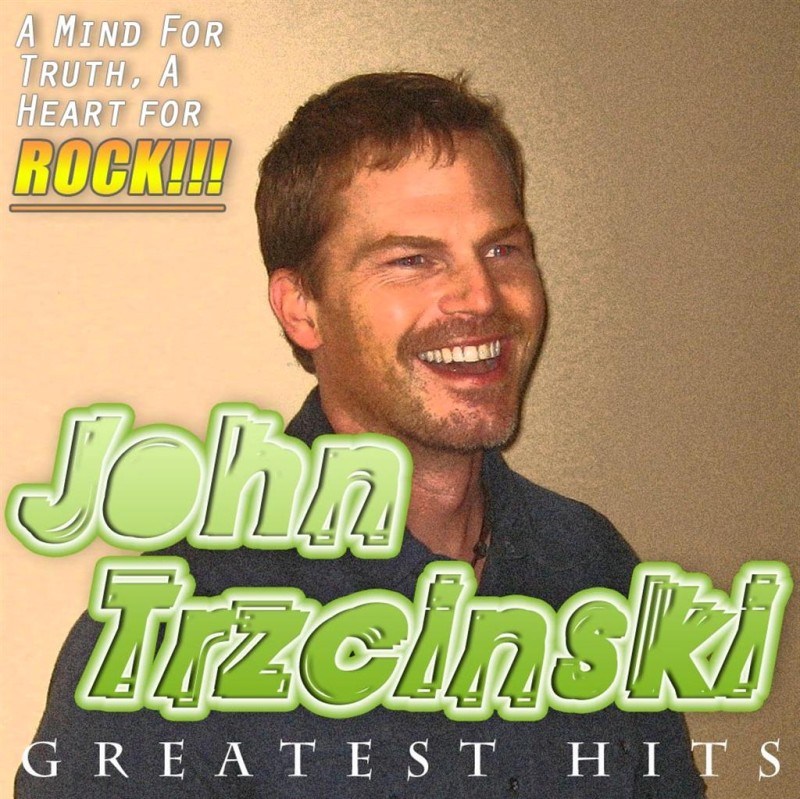 This one is a fake album cover featuring one of my classmates. It was his birthday, and we were all gathered around him and singing ‘Happy Birthday’ when I got this photograph. It just seemed to me like the kind of photo you would see on a famous musician’s Greatest Hits album , so I figured I would do him a favor and go ahead and make the album cover in advance. Now all he has to do is become a famous musician, and he’s all set! I know, I’m too generous–but come on, when you become a famous musician, the last thing you’ll want to worry about is what your album cover is going to look like! You’re welcome, John–just remember who loves ya’ when you’re rollin’ in the dough, baby! 🙂

I bet you’re all wondering what “IPTS” stands for. Well, as any RTS student will tell you, it stands for “Introduction to Pastoral and Theological Studies” –sort of like the seminary version of boot camp, only with more reading.

Anyway, the teacher is a really unique guy, and he always finds a way to make class fun by doing or saying something unexpected (like calling my classmate Olivia by the nickname “O-Dawg”). Seriously, every day is totally unique. I don’t know exactly how I came up for the idea for this particular image, other than the idea struck me as funny. (What’s even better is that I now that I have this image, I can alter the text to say whatever I want–“Mike Zone”, “RTS Zone”, “CPC Zone”, etc… Fun fun fun!) 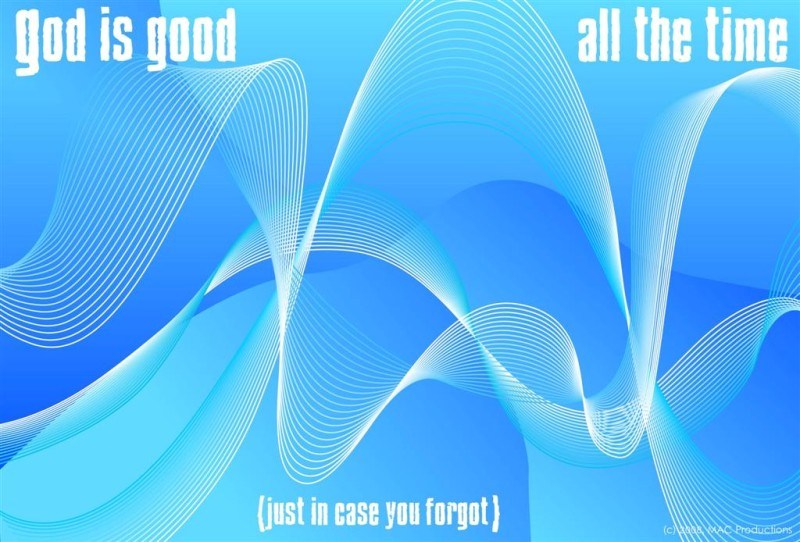 Three more and then I have to go to church. This one is my first attempt at an abstract background , and while I was just following directions from an online tutorial, I still think it came out nicely. And yes, the text was my idea–I wanted something reminding me of God’s goodness on my desktop while I worked. (If anybody wants the full-quality image for their own computer, just email me and it’s yours!) 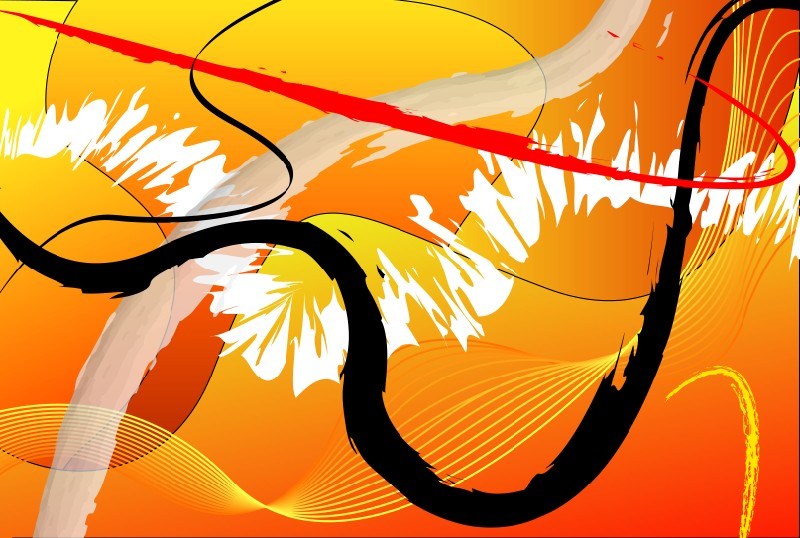 This one is my second abstract, and as you can see, it’s much wilder than my previous one. This one was done from scratch–no recipe, just me and my brain and Adobe Illustrator. Jen says it reminds her of fire and dragons–both of which I think are pretty cool–and I love the action and warmth that seem to emanate from the screen. Not bad for a second try, if I do say so myself! (Another good background choice, I might add…) 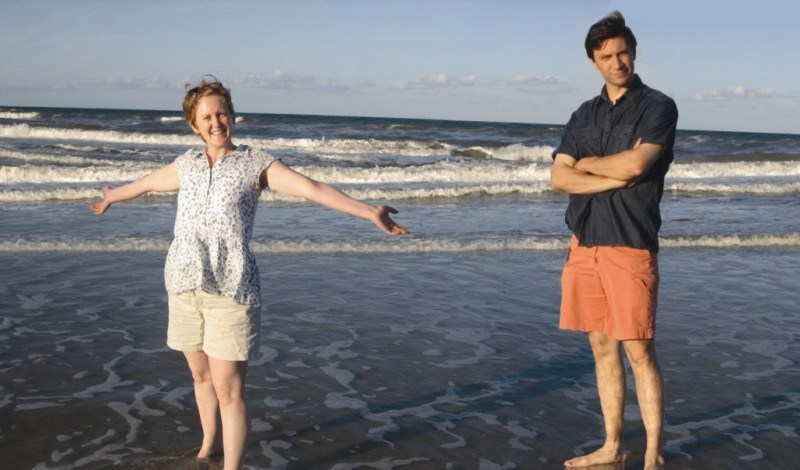 Finally, here’s an image that you probably would have never guessed was Photoshopped–even though it was. This is a composite of 2 different photographs –one of me and one of Jen–so I had to spend a long time getting everything to match up just right. I had to extend waves, change the color of the sky, straighten out the horizon, and change the water around our legs so that it matches. But now that it’s done, it just looks like we took it with a regular camera, which proves how deceitfully beautiful Photoshop can be! Hahaha! What power!

We
ll, that’s all for today, folks–church is in less than an hour and the shower is calling my name. May God shower you with blessings, too! Thanks for reading!