Yes, as many of you already know (and the rest of you have already figured out by reading the title line),  the Japanese school year is finally drawing to a close. It will resume again in April, the month of new beginnings (and the month where the sakura (cherry blossoms) reach their peak). Thus, March is traditionally the month of conclusions and endings, and our school schedules are no exception. Both Jen and I have already taught our last elementary school classes of the school year, so I thought it appropriate to start our three-part end-of-school-year special series with an update from the wacky world of elementary school teaching.

My last visit to Takine Elementary School was especially fun and exciting. It ultimately ended up being one of those, “Wow, I can’t believe I’m here in Japan and doing this” kind of moments. Why, you ask? Well, one of the nice things about the end of the year is that the teachers and lesson planners sort of relax a little bit, and plan in something fun just for the heck of it. And on this particular day, the lesson plan for the 5th and 6th graders, in its entirety, was: 1) Play Japanese games. 2) Play Foriegn (i.e. American) games. Now that’s what I call a lesson plan! 🙂

It was unseasonably warm that day, so we ended up playing outside. Whew, that was a workout—2 solid hours of running around and playing all kinds of games, most of which involved sprinting back and forth. It was a mental workout as well, since the Japanese games were all in Japanese (of course). But even though there were some games that I didn’t understand, I was surprised by the multitude of similarities between Japanese playground games and American playground games. Even the students and teachers were surpised by how similar many of them were, even though it’s likely that there was no original cultural connection. Fascinating…

Anyway, we started out playing a game of Japanese Freeze Tag. In this particular game there wasn’t just one oni (“it”), but there were five oni, and if one of them touched you, you had to freeze until one of your teammates touched you. Not rocket surgery, but still very fun. Plus, I got a great action shot of the moment: 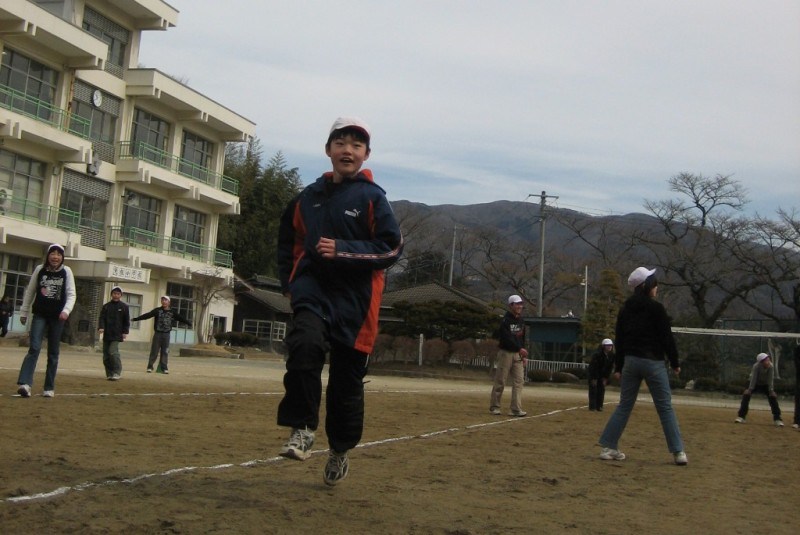 We played a few other Japanese games, and then it was my turn to suggest some games. One of the most fun (ironically enough) was Duck-Duck-Goose. Now, try to imagine about 20-30 Japanese 5th and 6th graders all playing Duck-Duck-Goose out on the playground, and having a total blast, and you’ll start to see what I mean when I say today was one of those “I can’t believe I’m here and this is really happening” kind of moments. But it really did happen, and as usual I have the pictures to prove it… 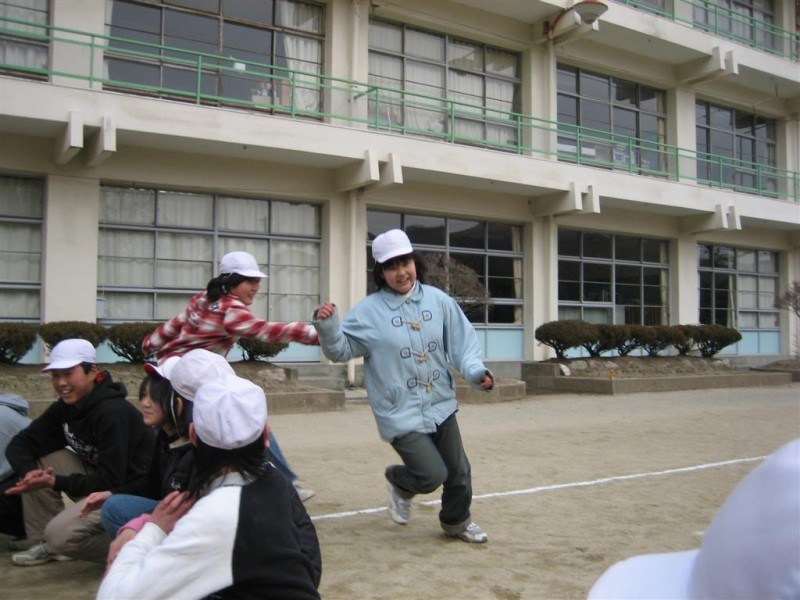 Then, as an encore, I decided to play Red Light Green Light. That was a hit, too. Plus, the kids went absolutely bonkers when I told them that I would become a traffic cop, and donned my cool shades and assumed a stern, serious expresion. They all started shouting, “Kakkoii! Kakkoii!” (“Cool! Cool!”). Hilarious. I tell ya, I’m a legend to these kids, and I owe most of it to my dollar-store shades. That, and my signature cheesy-cool 2-finger salute/greeting. 🙂 Anyway, here’s all the 5th graders stopped at a “red light”: 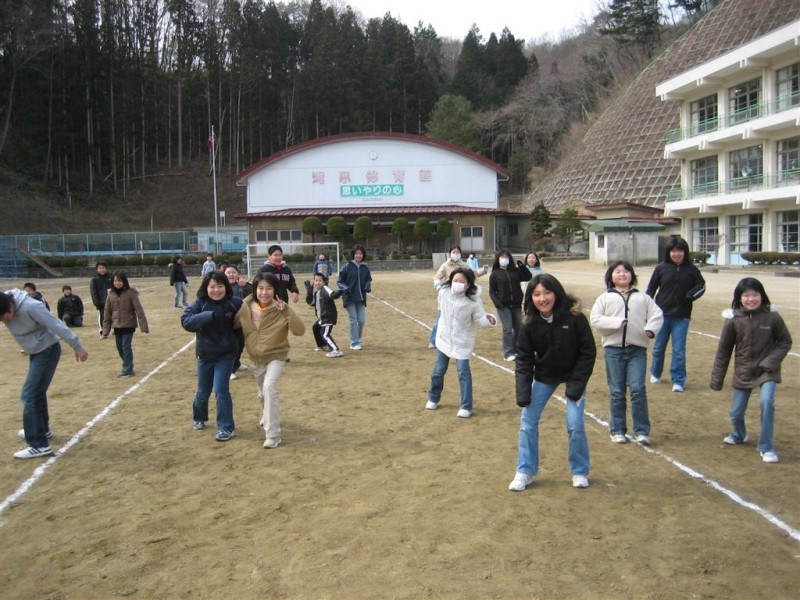 Two of the kids got dangerously close to running into the stern traffic cop (me), but they didn’t seem to mind. In fact, this is probably the happiest red-light-camera shot known to man: 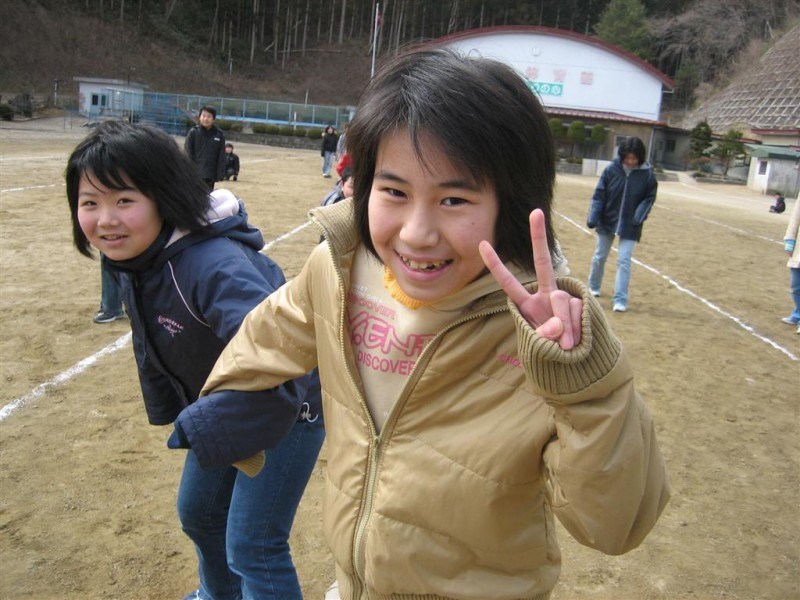 Awwww… adorable . I tell ya, Japanese kids are cute, cute, cute!!! That is, until they enter junior high school… 🙂

Then, for the final class of the day, I was asked to write a Chinese character on a Japanese kite . Thankfully, the semester of Chinese calligraphy that I took in college stood me in good stead, and I was able to write with concentration, poise, and confidence. My strokes all felt smooth and natural, and my stroke order was impeccable. The only thing is, I ended up writing the character waaaaaay too small. Plus, some of my strokes weren’t as accurate as they should have been, so now the kite looks really, really funny. Oh well. I’m a foreigner–I’m supposed to make mistakes! 🙂 (I chose the character for “dragon” ( ryu ), because I was born in the year of the dragon, and because dragons are considered powerfully good symbols in Japanese culture.) 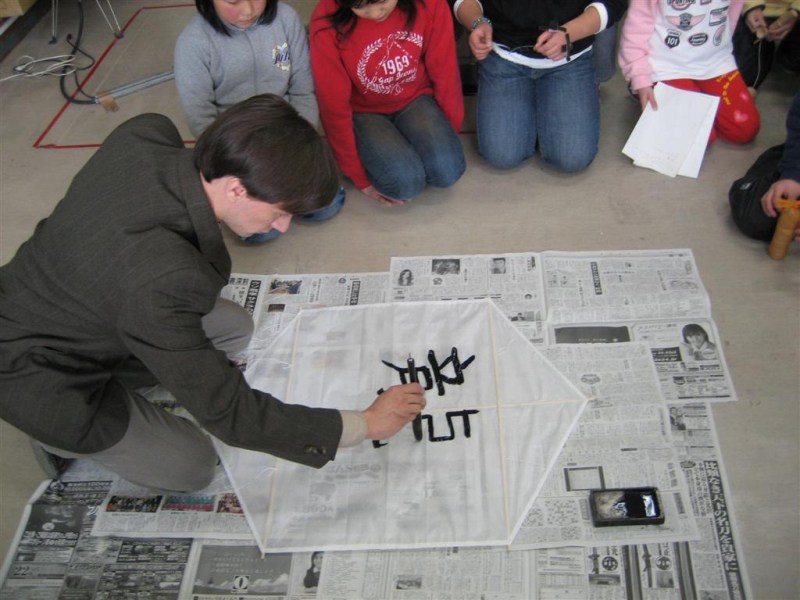 After that, I had some time to kill, so I practiced my calligrapy a little more in the office. The brush-pen was old and mostly out of ink, and my penmanship left much to be desired, but the sentiment of the words summed up the day that I had: 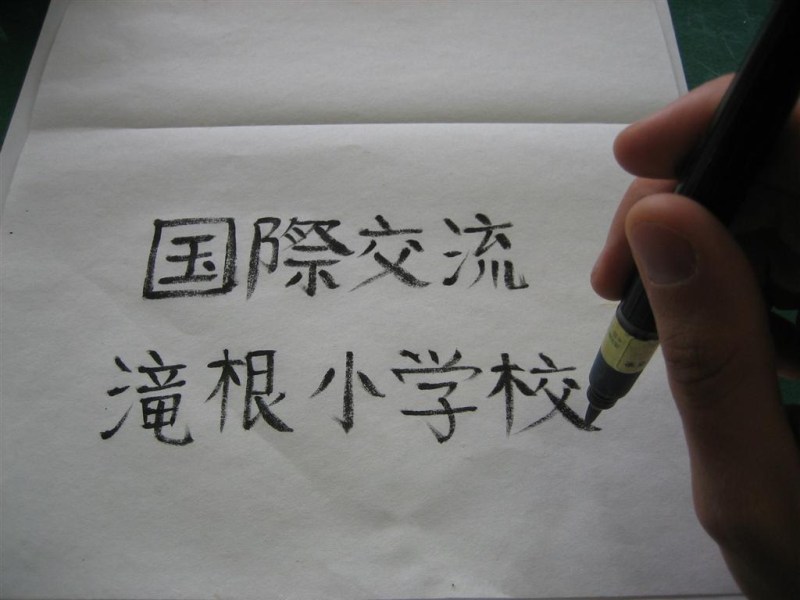 ” Kokusaikouryuu. Takine Shougakkou.” (“International Exchange, Takine Elementary School.”) This really was a day of intense and wonderful cross-cultural exchange. What a great year this has been so far. Wonder what next year will hold? Stay tuned and find out… 🙂