We have some big news. We mean BIG. Not every day do we have news this big, this profound, this crazy. You see, Mike is a different man, a changed man, a much more creative and energetic man. And all because of the purchase of a $20 headset from K’s Electronics. Allow us to explain…

You see, for years now Mike has dreamed of recording his own songs, goofy comedy skits, and just about anything else that popped into his head. As a kid, he spent hours and hours recording fake radio shows, commercials, and high-speed dubbed freak-outs. And about 10 years back he even tried his best to record multi-layered harmonies with two tape recorders (and two tapes) in tandem. But sadly, it was too much work and the results were too inconsistent (the tape recorders played back tapes at different pitches/tempos). In fact, he gave up his dream 10 years ago along with his tape recorders.

But then, about a month ago, the dream sparked back to life. He was on the train on the way to work, and happened to be listening to Who Let The Sheep Out by Jon Barnes (who will remain anonymous), and was thinking to himself, ” Man, I wish I could do stuff like this.” Just like that, like a flash, he thought to himself, “Hmmm. Wait a minute. What if I could use my computer as a sound recorder? Then I could record everything I want digitally, with no loss in quality, tempo, or pitch! It’s so crazy, it just might work!” A few days later, he went to K’s Electronics store and bought a $20 mic/headset combo and downloaded an incredible sound recording software called Audacity, and he hasn’t been the same since. He’s been consumed–completely consumed–with creative energy. In fact, he’s facing a deluge of ideas that have been bottled up for years, and some days his fingers can’t type fast enough to capture them all.

So for the past 2 1/2 weeks, he’s spent every spare moment he could working on his new sound recording hobby. So far he’s recorded a score of fake commercials, a political advertisement, a weather report, a corny radio drama, and even a full-length song–and that’s just for starters. His current plan is to craft a whole album called WMAC–MAC Radio!!! that will include all of the above, and more, plus cheesy DJ’s and radio jingles.

In the meantime, why not check out his website , where you can listen to and/or download all of his stuff for free! Why not take a quick spin and see what you think???

And just to whet your appetite, here’s one of his best bits to date. There’s even a cameo appearance by…can you guess who???

Hehehe…click twice on the little arrow and enjoy! 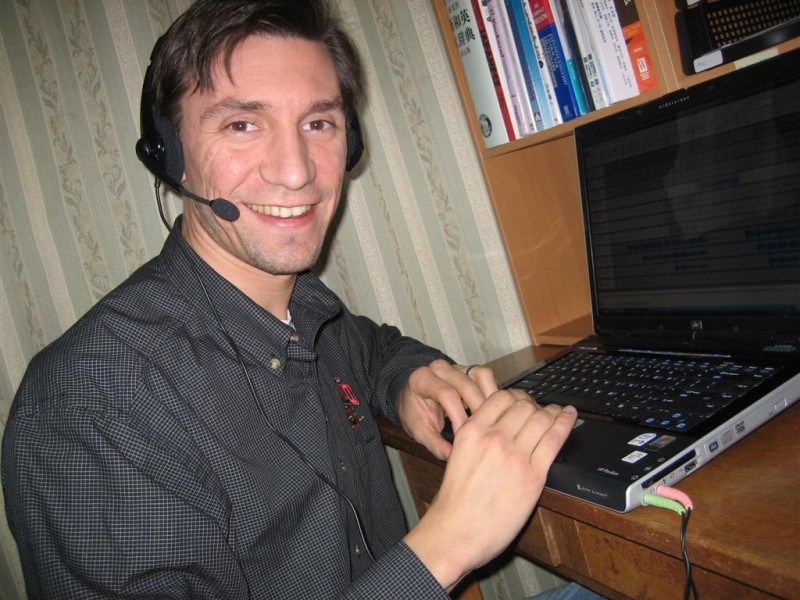 DJ Mike and his new recording studio (aka the desk)!

As if this adventure here in Japan couldn’t get any crazier!!! Even more exciting than everything else is that fact that through these experiences, we’re becoming more and more the people we were created to be. In the words of someone dear to us, we’re “living the dream.” Awesome!!! Bring it on!!!