So here’s something you may have been wondering about–how exactly does one get from point A to point B in Japan? I bet you could see this answer coming a mile away, but, well—it depends.

When I was in school studying Japan, I got the impression (somehow) that in Japan, people don’t use cars very much. After all, it’s a small country, and cars are expensive. So I figured that most people used only public transport (which, of course, is always straightforward) to get where they’re going. Well, peanuts to that —I couldn’t have been more wrong. Not only do the vast majority of Japanese families own cars (and pretty nice cars, too, with huge GPS displays in the center of the dashboard and little lighted buttons all over the place), but the public transport system is a mix of the intuitively simple and the bewilderingly complex. Thus, we English teachers are the source of frequent amazement among both our co-workers and students when they discover that we don’t own cars (we’re not allowed to by our employer). “How do you get around?” they ask. The answer— it depends.

Of course, around Funehiki-town, we either walk everywhere or go by bike. Any further than that, and we have to take the train , usually to Kooriyama (the nearest big city). Here in the countryside, the train lines are few and far between, and only run every hour or so, which is a bit inconvenient if you want to go somewhere that the train doesn’t (or at a time that it doesn’t). Even so, the train is our #1 mode of transport, and we’ve got the local train schedule about memorized by now. But if we’re going any futher than Kooriyama, things get interesting–and very complicated. 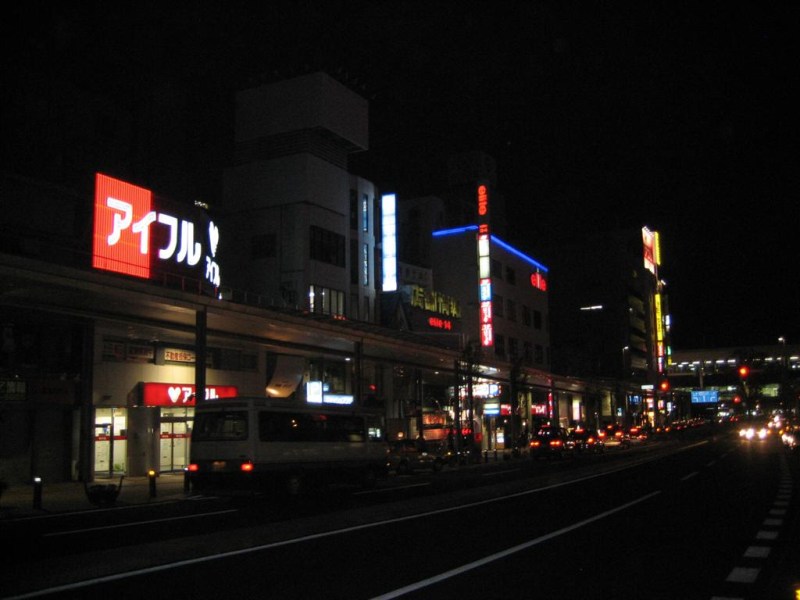 In Kooriyama (and the rest of Japan), you’ve got all kinds of transportation going on. You’ve got buses, trains, taxis, and Shinkansen (“Bullet Trains”), all coming and going, and trying to make sense of it all can be quite a challenge. For one thing, pretty much everything is in Japanese, and unless you know the kanji for the place you want to go and some other key words you might find yourself hopelessly lost in a sea of Chinese characters without a paddle. But even if you do, you might have a hard time. Take the buses, for example. If you have someone with you who knows which bus to take you’re in the clear, but if you don’t, you have to ask someone, because we have yet to find a centralized, reliable source of information on bus schedules anywhere. And even if you do ask, you may find that the bus only runs from a different station than yours, or at some obscenely late time, like Jen and I did on our way back from Chiba.

And then there’s the Shinkansen , which is a whole ‘nother ballgame:

The famous Bullet Train–outside (above) and inside (below) 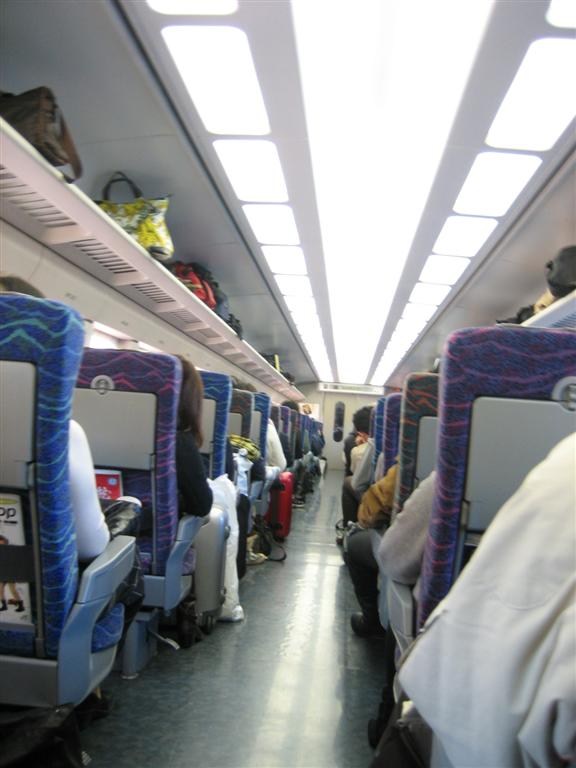 Overall, traveling by Shinkansen is one of the best ways to go. It’s expensive (about like taking a plane), but it’s faster and easier than a plane and pretty straightforward–most of the time. Every so often you encounter a snag that makes your day difficult, like trying to figure out which train is yours when they’re all listed by name rather than by destination (they all have special names and numbers that you have to know, and some trains only stop at certain stations along the line). Also, sometimes a simple train line map is fiendishly difficult to find, especially if you’re changing trains (since most maps are outside the ticket gate). And every so often, you get a train schedule that’s almost impossible to decipher, even if you do read Japanese. Like this one, for example:

And here’s a close-up. I spent the better part of an hour trying to make sense of this particular schedule, and while I can now use it (sort of), I still don’t understand the vast majority of what it’s saying or why it couldn’t be made simpler.

However, all that being said, the system really does work, and it’s a pretty good one, too. As long as you’ve done your homework, and you don’t mind asking total strangers for directions, you can get to where you need to go without too much trouble. So if you ever come to Japan, never fear; you’ll be fine. And besides, we’ll be here help to get where you’re going. So what are you worried about?

Hey, if it weren’t difficult sometimes, it wouldn’t be much of an adventure, would it? 🙂