Japan’s spiritual darkness and an opportunity to be light

Yesterday was Shuubun no Hi (the Autumnal Equinox, one of the two days in the year when the day and night are equal in length). These two days, together with Obon (the day when the spirits of departed ancestors supposedly return to earth) mark the three biggest days for ancestor-worship idolatry in Japan. Thus, while Jen and I are glad to have a day off today, it’s sad to think that many Japanese are using this day to worship idols, ancestors, and false gods.

This past Obon (August 15th here in Fukushima), Jen and I went to the local temple for the first time, and saw with our own eyes what we have heard about with our ears: hundreds of graves, most of them recently visited, complete with elaborate offerings of flowers, expensive food, and lots of incense: 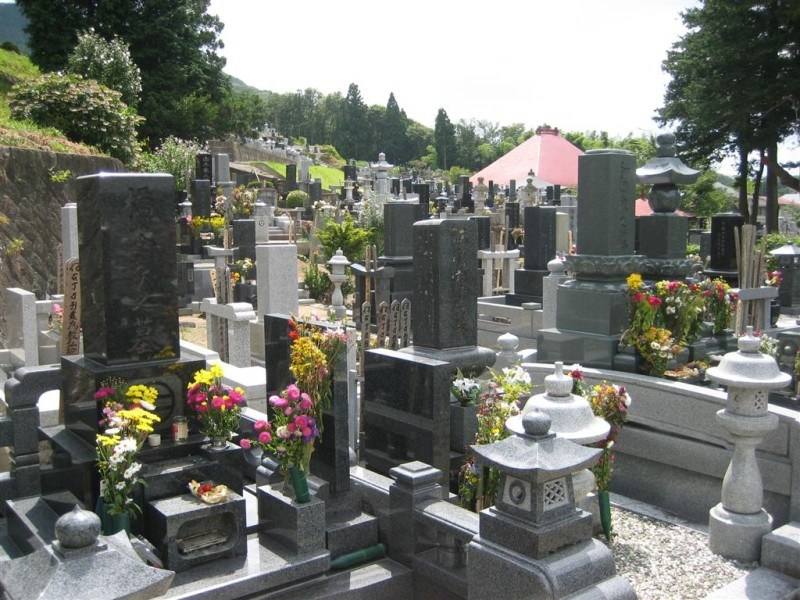 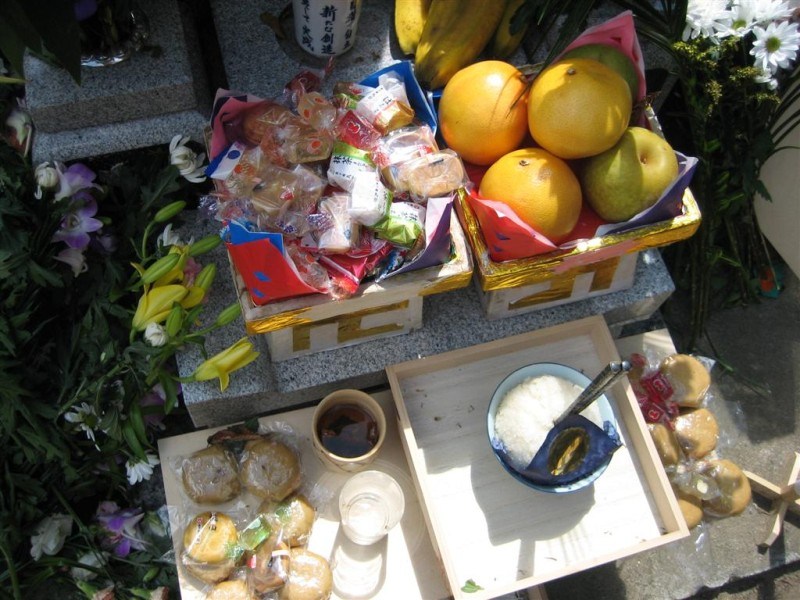 It was very sad to think that the very place where we were standing was the local epicenter of idolatry. (People in Japan pray to their ancestors, asking them to watch over their health, prosper their businesses, and generally take care of them.) We even saw offerings made to Buddhist idols that supposedly watch after children: 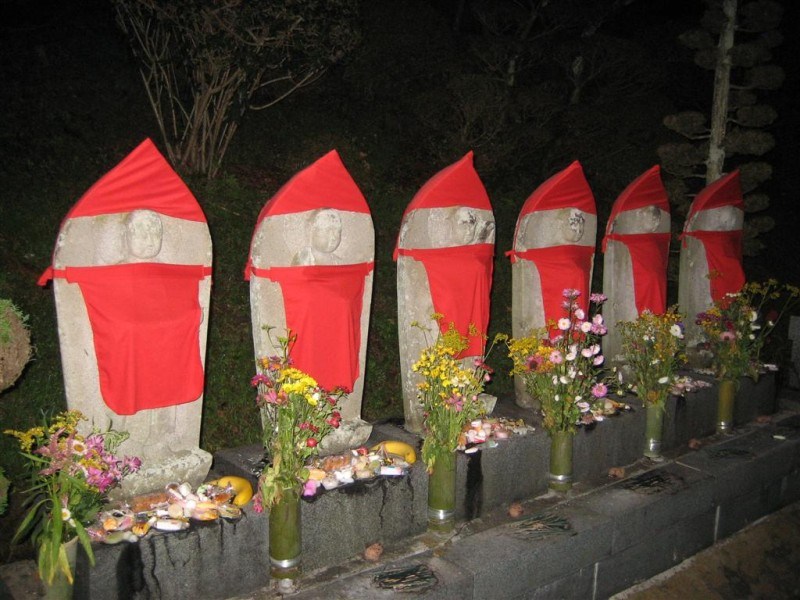 It was even sadder to see the temple’s dumpster jam-packed with the previous week’s offerings, rotting away and covered in bugs, and to think that next week, it would be jam-packed with another load of useless, decaying offerings. And finally later that week we went to the Tourounagashi, a traditional lantern-floating festival that suppsoedly marks the return of the spirits of departed ancestors to the netherworld: 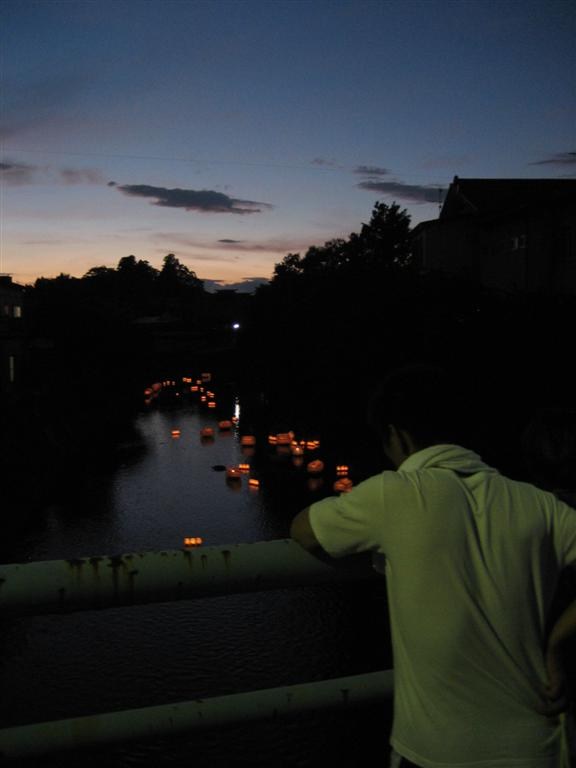 It’s hard to see so many people all focusing their hearts in the WRONG direction . It’s gut-wrenching, like when you see one of those late-night televangelists that take advantage of the weak, lonely, and simple, robbing them of their money and posessions and offering them a false hope in return. But no matter how much anyone prays to his or her ancestors, they are powerless to help and utterly unable to save. Only the living God can offer a true hope that will not disappoint those who trust in it.

And actually, on that note, today also marked one of the best opportunities we’ve had since we’ve been here to share the gospel with some of our students . There is a group of 20 junior high-school kids from Tamura city that will be going to Mansfield, Ohio for 10 days as part of an exchange program. They have been taking special orientation sessions taught by us English teachers for the past 2 months, and today, Jen and I taught the last orientation session, part of which was about “church in America”. Talk about a great opportinity to share the gospel! Mike took the opportunity to make up a worksheet in Japanese all about the fundamentals of what the Bible teaches, complete with blanks that the students had to fill in. He also made up a worksheet where they had to match basic English church terminology (like “Praying to God” or “Hymn”) with the Japanese meaning. 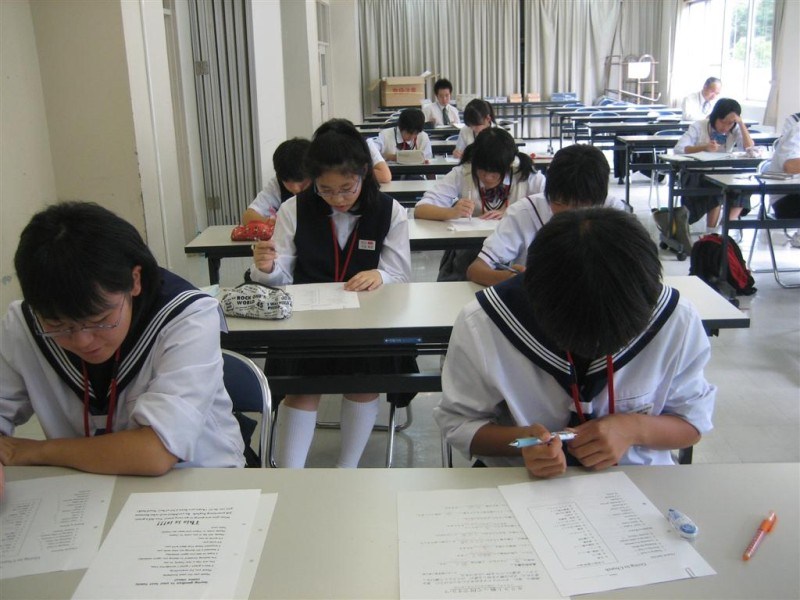 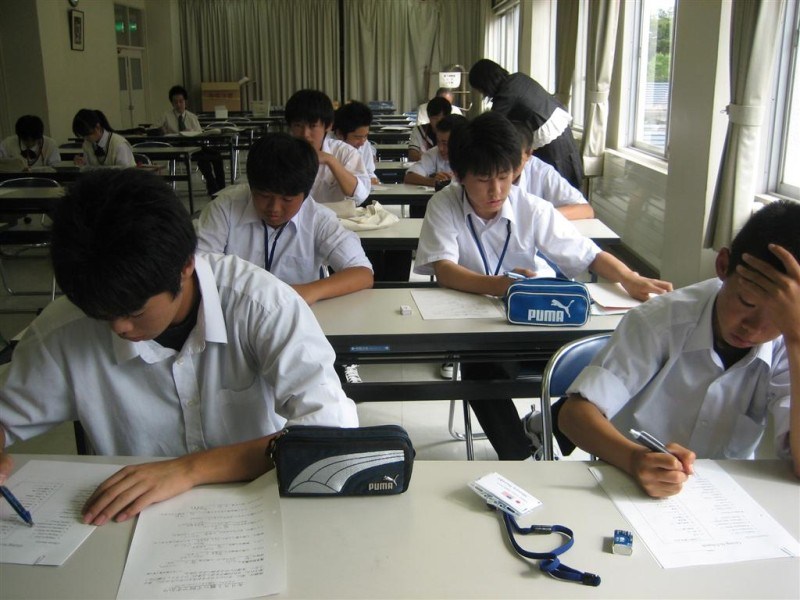 As we expected, they were by-and large clueless about the basics of Christianity. So in all likelihood, all 20 of them heard the following message (in their heart language) for the first time:  God is holy, but people are not, and so people are separated from God. But God loved the world, and sent Jesus Christ, who was hung on a cross. He takes our sin and gives us a pure heart in return. He arose from the dead three days later, and so those who believe in him have new life, and will go to heaven when they die.   We also had a snack/resource table during the break time, complete with a manga Bible, an art-picture book of Jesus, gospel message brochures, and bilingual Bibles:

And to think we were able to do all that at the local community center, which usually prohibits religious activities–God is awesome!

Please pray for these 20 kids, and for the three Japanese adults (one English teacher, and two employees of the City Board of Education) in attendance today. Please pray that God would nurture the seeds that he planted today through their trip to the United States, and that many of them would eventually come to see their personal need of Jesus and claim him as their Savior and Lord. After all, He himself has said, ” As the rain and the snow come down from heaven, and do not return to it without watering the earth and making it bud and flourish, so that it yields seed for the sower and bread for the eater, so is my word that comes from my mouth: It will not return to me empty, but will accomplish what I desire and achieve the purpose for which I sent it .”