Today was the last day of classes before Tamura City’s summer break, which goes until August 26th or so. Thus, I (Mike) am officially on vacation, but Jen’s Wakakusa classes will run for another week, and resume on the 15th–bummer! 🙁   Over summer break, we’re hoping to visit our friends down in Chiba, attend another Baptist Youth Camp, work on some up-and-coming artistic projects, and hopefully have some down time, too! At any rate, today marked the official end of my first year of teaching in Japan, and what better way to commemorate this half-way point with some reflections on how my schools are going lately? There just isn’t one, is there? Well, ok then! Let’s get started!

Things are continuing to improve at Takine Jr. High School. From the moment I set foot there, I knew it was going to be a challenge to get the kids to speak to me in English. So, in an effort to drum up some motivation, I created the “point system.” Basically, I have these little green paper stars (cut out meticulously by hand) that I give to kids whenever they speak English well or say something that impresses me. Mike-sensei gets impressed, one point. That’s the deal. 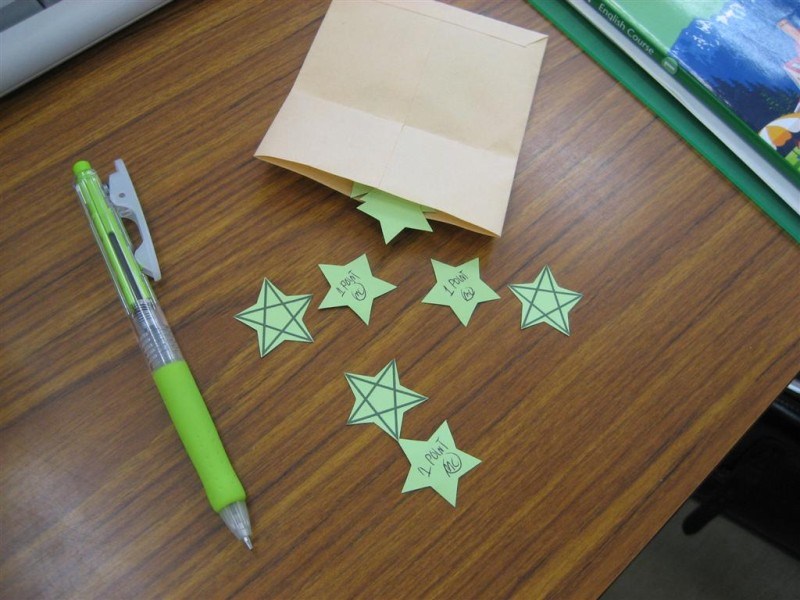 Overall, the point system has been a big hit. Some kids still won’t talk to me, but some have really started speaking up. ” Point please,” I often hear, and I always answer with some kind of grade-relevant yet challenging question in English. Sometimes they do well, and sometimes I end up having conversations like this :

Mike: No, no, what’s your favorite color?

Oh well. They can’t all be winners, but I’ll still give ’em a point for trying.

And of course, the points are the sole legal tender in a unique world market known as Mike-Sensei’s Store. Thanks to my Mom in Kentucky, I am amply supplied with enough random goodies from the dollar store in America to have something for everyone–all for a price. My store (which is inside a beautiful Indian gunny-sack) is only open at random days during the week, and like a real store, has slow days and busy days. But overall, it’s been fun for everyone, especially me–especially when I spot a shoplifter (which tend to outnumber the customers on most days). 🙂 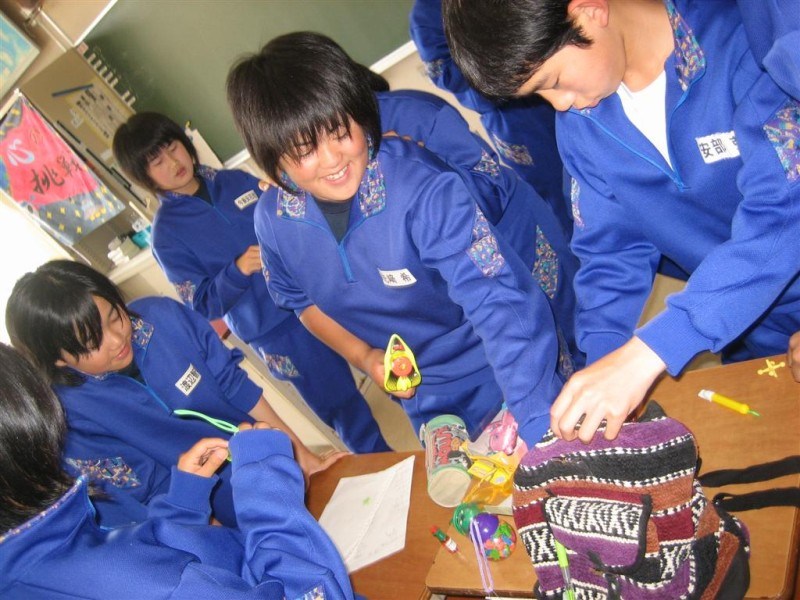 And last but not least, say hello to Takine’s newest wriggly craze,  my little red pal Hebi-chan . It all started when I took this little wooden hand-made snake-pen (that I got from a good friend in America) with me to class. I was absent-mindledly flipping it around and a student asked me, “Wat’s dis?” So I answered, “This is my snake. Her name is Hebi-chan [the name means “Snakey”]”. Since then, Hebi-chan and I have been inseperable, and I take her to every class I teach. She’s a big hit, and students are often stealing her and pronouncing, “It’s mine. It’s my Hebi-chan.” There’s not a student in my school who doesn’t know  Hebi-chan , and while some may profess that they don’t like her, I know in deep down their hearts, they love her like everyone else. How could you not? 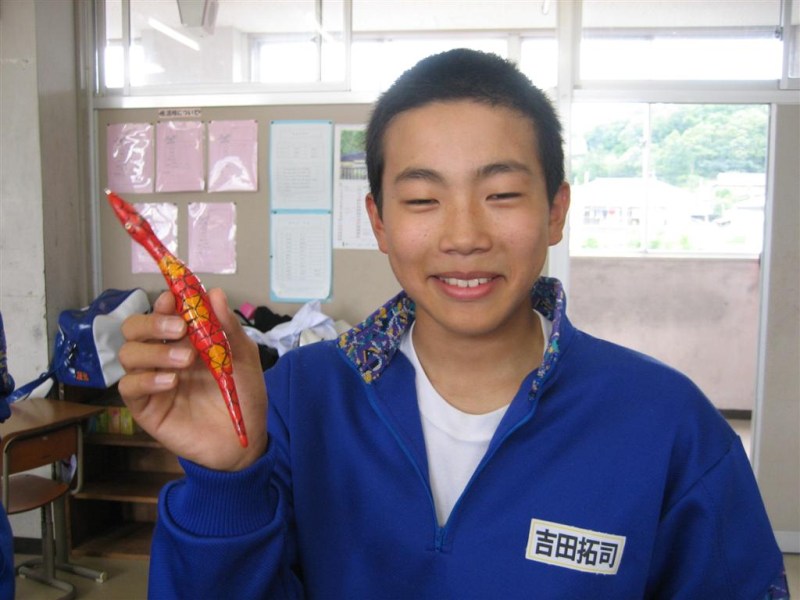 Meanwhile, things are continuing as usual at my Elementary Schools –which means, superbly well. Fridays are the highlight of my week; as much fun as Junior High can be, Elementary school is definitley way more fun. In fact, I tell my other teachers that Monday thru Thursday I go to work, but on Friday I go to play. Allow me to share a few highlights:

First of all, I would like to share with you the secret of my success as a teacher and the true source of my popularity with the kids. It’s a $7 toy from Toys-R-Us called a Pin-Pon Buu. It’s like a quiz-show toy with a circle on one side (for right answers) and an “X” on the other side (for wrong answers). Mine is even complete with sound effects ( pin-pon means it’s a right answer, and buu means a wrong answer). I’m telling you, this thing is like magic; the kids go totally bonkers for it. They’re always clamoring for it, before, during and after class–“Let me do it, sensei!!!” In fact, some of Jen’s kids at Wakakusa go so far as to call me ” Mr. Pin-Pon-Buu “. Hey, I’ve been called worse… 🙂 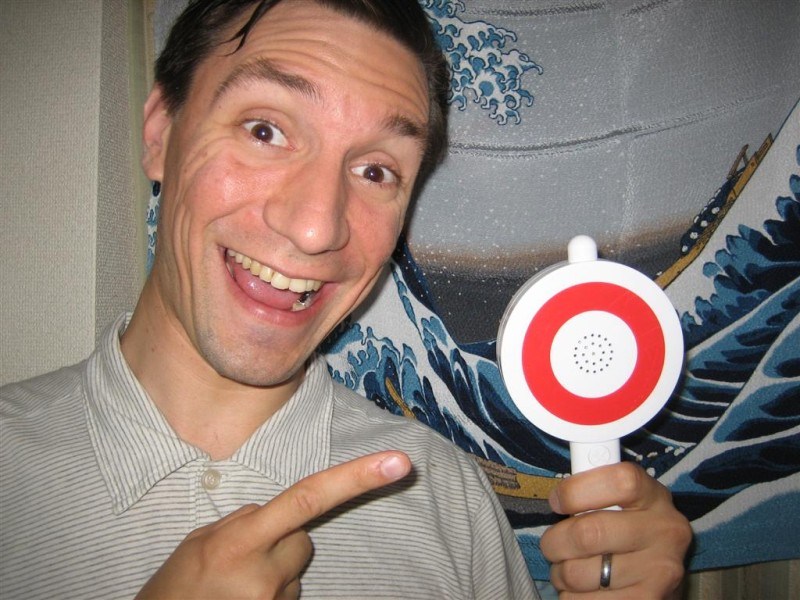 Not only do my kids like to try out the  Pin-Pon-Buu for themselves, but they also enjoy playing a game called “Let’s steal the Pin-Pon-Buu from Mike-sensei.” This game usually ends up with me running around the school playground at top speed, trying to escape from the hoards of young children who are closing in on me to steal my precious Pin-Pon-Buu . It’s good exercise, that’s for sure! The picture below is a great example. Note that every single kid in the picture is chasing after me… 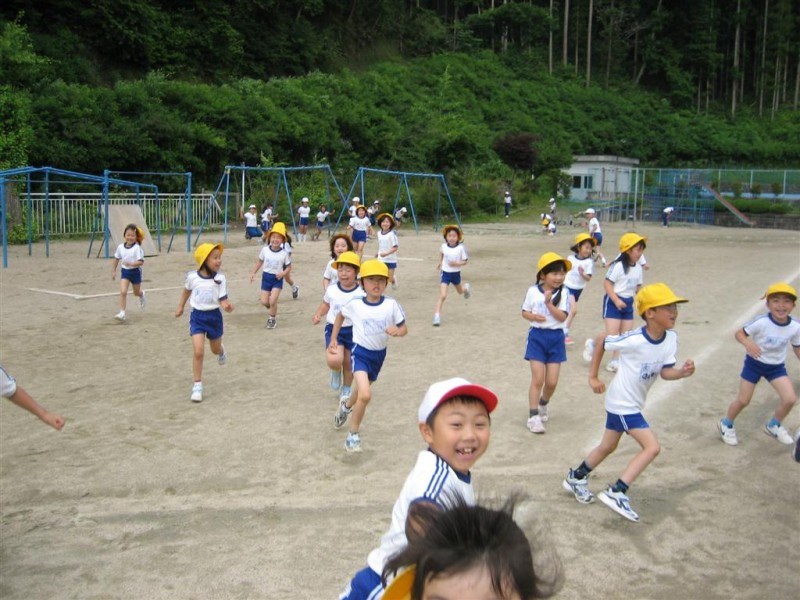 Whew! Of course, sooner or later I run out of steam, and they eventually succeed in taking my Pin-Pon-Buu. And then it turns into a new game, namely, ” Let’s make sure Mike-sensei doesn’t get the Pin-Pon-Buu back “, which also requires quite a bit of running. Small wonder I’m usually falling asleep in the train on the way home!

Lastly, here’s a really cute video I took of a recent 3rd-grade English class that I taught. I was teaching them foods, and I decided t
o do a “shop” game, where they would come to the front and buy the food cards from me with their fake money. But since there were more kids than food cards, once my store was sold out, the kids who had cards became shops themselves, and voila! An economy was born! Check it out:

Hehehe…Anyone want a used salad? I bought it used from someone else…

Well, that’s it for my first year of teaching here in Japan! It’s been a good year. On to summer break and year number two!

And the adventure lives on…