Yesterday Jen and I got back from Adatara Bible Camp, home of the 2007 Fukushima Prefecture Baptist Youth Camp. We went up on Tuesday night and left Thursday afternoon, and every moment was precious to us. The food was great, the scenery was pretty, and the weather was fantastic, but it was all the new friends that we met that made our time really special. It was amazing, really–we weren’t even trying, but new friends were popping up left and right. What a great testimony to the unity of believers in Christ! We’re hoping to stay in touch with many of them as time goes by.

Here are some of the highlights: 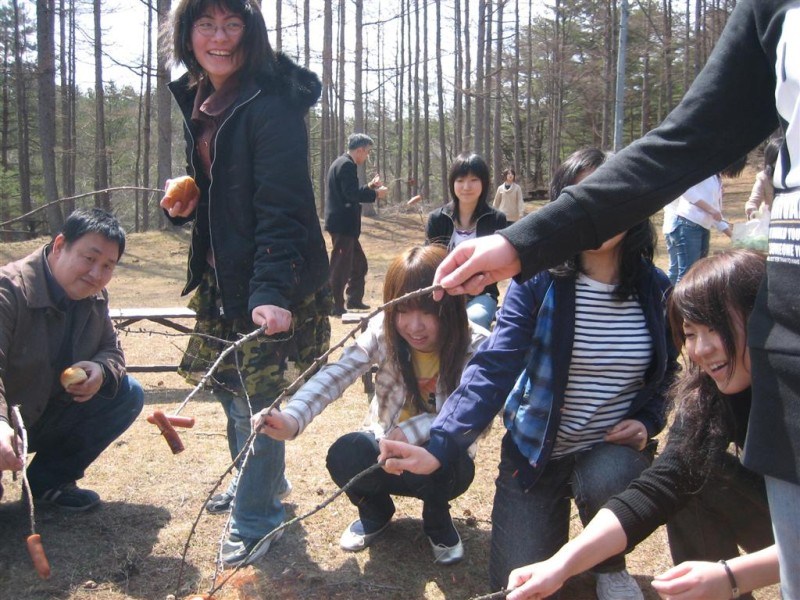 For lunch on Wednesday we had a good ol’ fashioned Japanese weiner roast . This is a time-honored tradition that began in the Heian Era when a great warlord named  Hotto Doggu  conquered his enemies by luring them into the open with the smell of roasting weiners. And of course, in keeping with ancient Japanese customs, both the campfire and the weiners were sleek, compact, and very efficient. Afterwards, we also roasted marshmallows, which isn’t really true to Japanese culture, but hey, it was still fun. 🙂 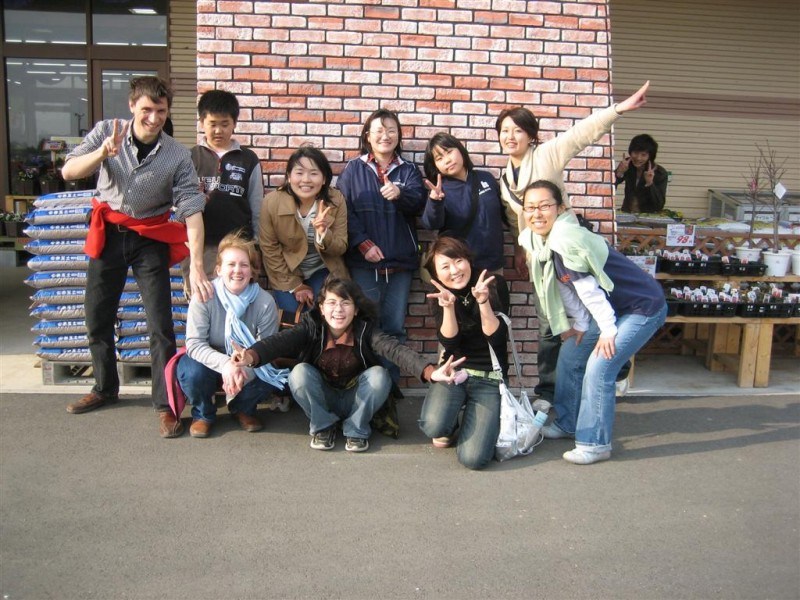 Then, for our afternoon entertainment, we took a walk to the local equivalent of Wal-Mart, called Plant 5 . Don’t ask me why it’s called  Plant 5 ; it’s probably really catchy and cool if you’re Japanese. Anyway, the idea was for everybody to split up into teams, walk to Plant 5 , and spend 500 yen for a gift for Pastor Takahashi and his wife (the camp caretakers). The one thing that they didn’t mention was that the store was over six miles away!!! It took us two whole hours to walk there, so by the time we arrived, we were in no shape to think logically about what to buy. But it was fun nonetheless. 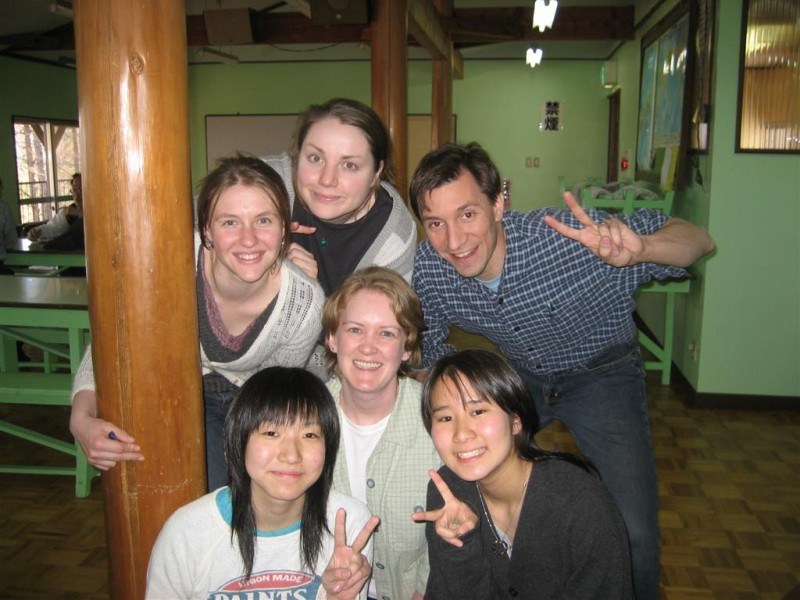 Part of what made our time so much fun was that two of our co-workers, Lis and Patty, were able to come with us; it ensured that we spoke a better balance of English and Japanese. Here’s a picture of us, Lis and Patty, and two of our new friends , Nozomi (bottom left) and Ayumi (bottom right). We especially hit it off with Ayumi, partially because her English is excellent, and partially because she’s almost as crazy as we are.

Seriously, we had so much fun with her that most of our pictures with her are too goofy to show here. It was like being back in the CPC Singles group again… 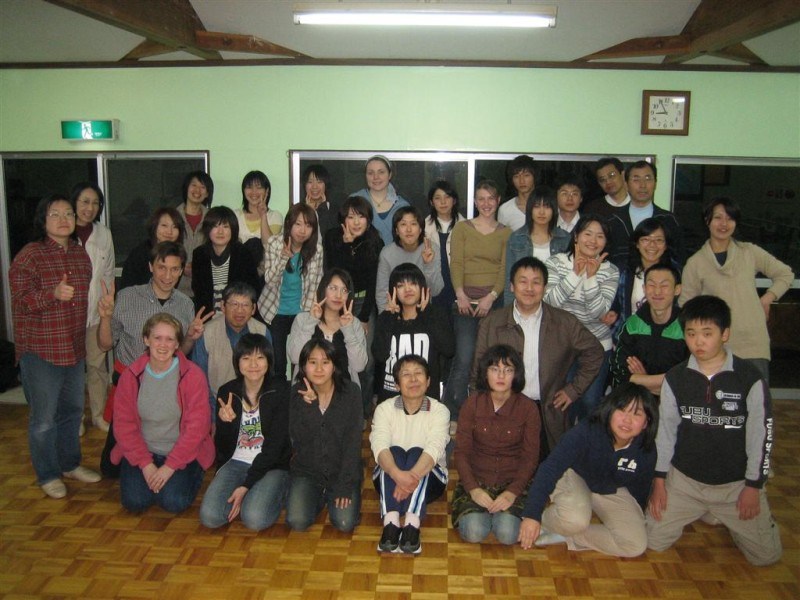 All in all there were about 40 people there, of all ages and sizes, and every one of them was a gift of grace. It was especially encouraging for us to be in a place where Japanese youth were on fire for Christ, since pretty much all the kids we interact with on a daily basis aren’t Christians. The kids were were also encouraged to know that even though they feel like they’re all alone, there are others like them who are endeavoring to take a stand for what they believe. It’s so hard being a Christian in Japan; the pressure to cave in and be like everybody else is intense. And that’s why events like this are so needed, and so precious. 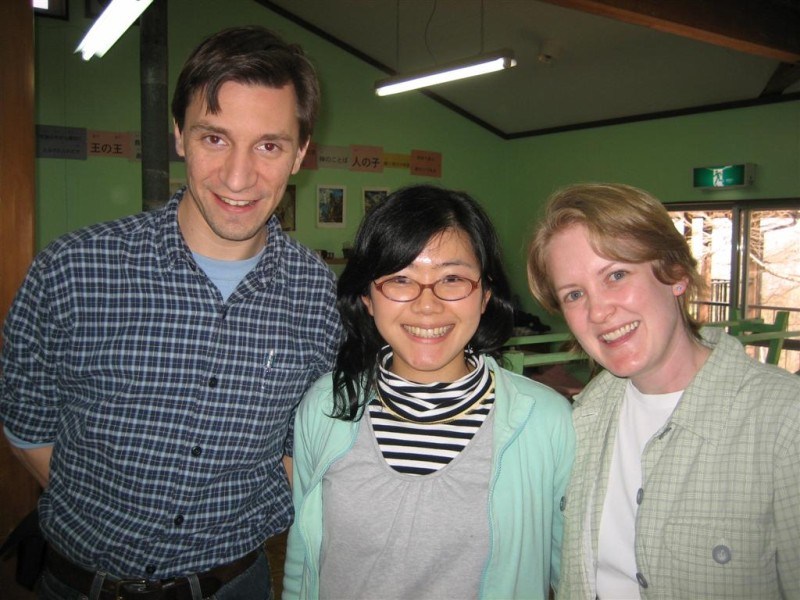 Lastly, here’s a picture of us with another new friend named Aya . Aya is hoping to attend graduate school in the States with an eye toward starting a career in women’s ministry here in Japan. Right now, much like us, she’s really struggling with trying to figure out how her big dream will work out in the real world, and coming up short on answers. All three of us are in a place where we’re having to trust that God has a plan, and that He’ll provide for us in ways that we can’t now see. We pray that He’ll guide Aya and that He’ll give her the strength that she needs to walk the path she’s been called to.

Our only regret is that more people weren’t there to experience it all. We hope that next year, we’ll be able to invite some of our students to come with us. And we’re looking forward to the upcoming family camp in May. Praise God for this time!