For the most part, opportunities to talk about God or share one’s faith are rare in the job of an ALT. The reason has less to do with religion in public schools (many students have Shinto charms on their bags or pencases) than it does with the fact that everyone is so busy and there are so few times to share your heart with anyone. But it’s Christmas, and Christmas is the best season for outreach in Japan. Praise Him, God is creating opportunties and opening doors for sharing little seed testimonies of faith all over the country–and in small measure, even here at Takine Junior High School.

Every Wednesday during lunch, I have my own “Radio Show” (in both English and Japanese) that is broadcasted to the entire school. I usually talk about something goofy from the world of Mike-Sensei, such as some new plush character that has just been introduced or a new item for sale in Mike-Sensei’s Store (TM). But recently my Radio Show has been the vehicle for sharing little nuggets of faith as well. In November, I was able to talk about Thanksgiving, and I mentioned that the difference between the Japanese “Labor Thanksgiving Day” is who we give thanks to (to each other vs. to God) and why (working hard vs. God’s gracious provision). And this December, I’m doing a four-part series about Christmas, each week sharing some little part of the Christmas story with everyone. 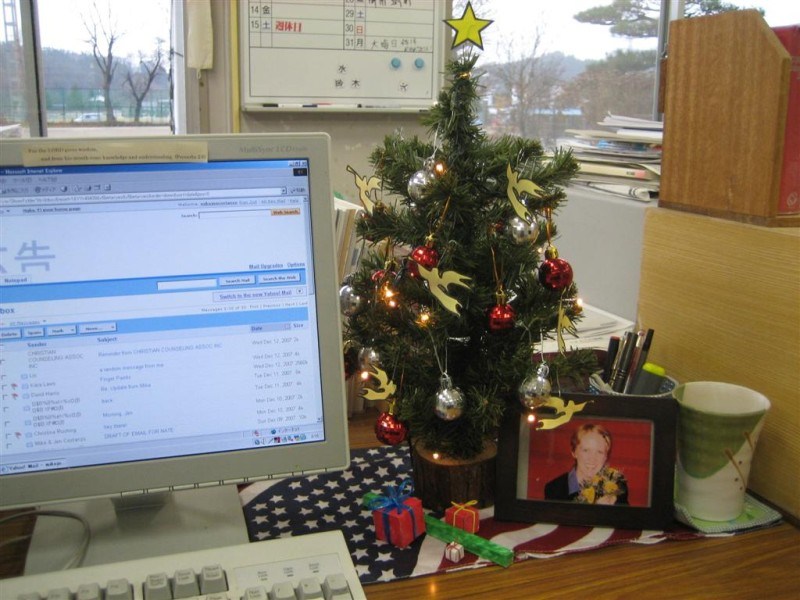 This year God provided me with a mini-Christmas tree (above) and a vision to put it on my desk and decorate it with things that symbolize the real meaning of Christmas. And for the last three weeks, to the amazement of many of my co-workers and students, I’ve added a new kind of ornament   each week. The first week I put disco-ball ornaments and a star on the top of the tree, the second week I put up some cut-out paper angels , the third week I added lights , and just this past Thursday I added some new, hand-made presents to be proudly displayed under the tree: 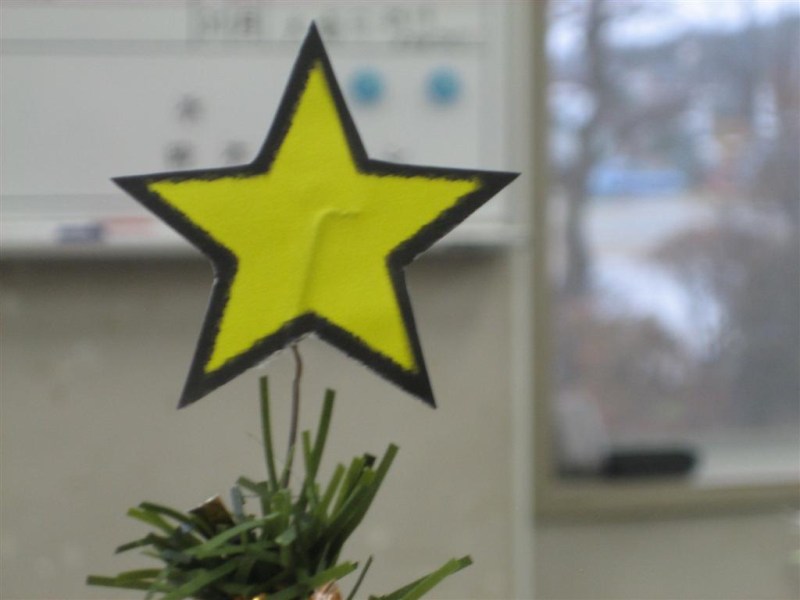 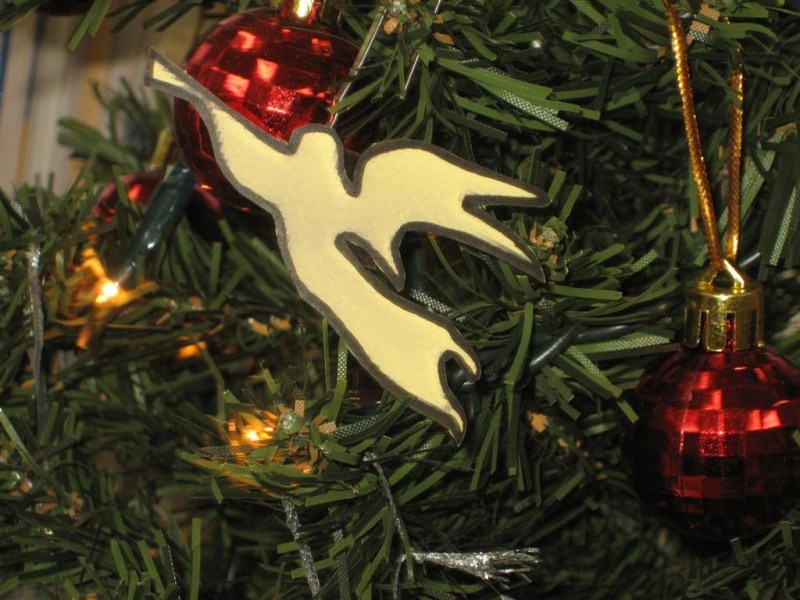 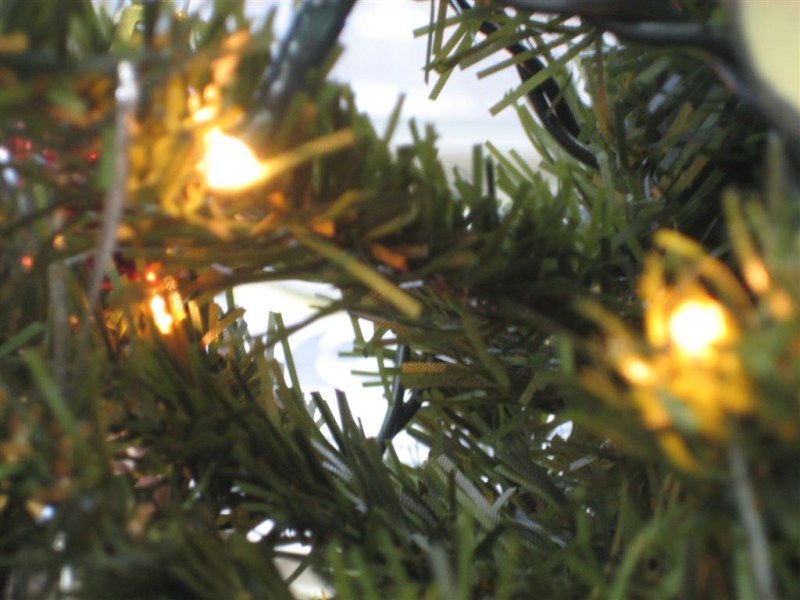 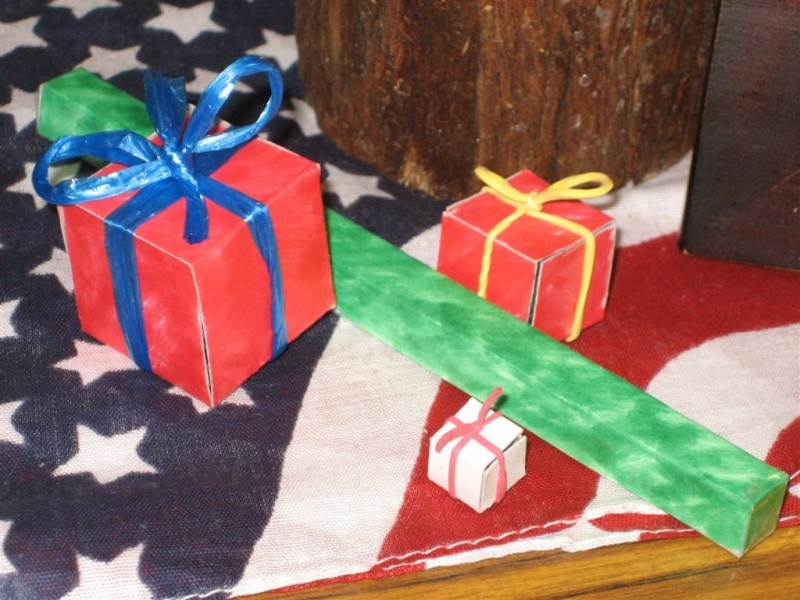 I’ve used each of these as the basis of a radio show this month, and each week was able to share some kernel of the Christmas story that people here have likely never heard. For example, with the star, I talked about how on the first Christmas a new star appeared, and how it moved through the sky to show wise men from a far eastern country where Jesus was born. I used the angels to talk about how angels appeared on the first Christmas and announced the good news of the birth of Jesus. I used the lights to share how Jesus is called “The Light of the World”, and that the beauty of Christmas lights at night remind us of Him. And this week, I’m going to explain that the reason we give presents on Christmas is because God gave us the greatest present of all–Jesus.

Please join me in praying for the results of this mini-outreach. I have no way of knowing whether or not these words are falling on deaf ears, or if some kids will one day remember them and begin to develop an interest in the gospel. All I know is that God can use very small things to very great effect. May the symbols of Christmas (which are here in abundance) point people to Jesus this Christmas.